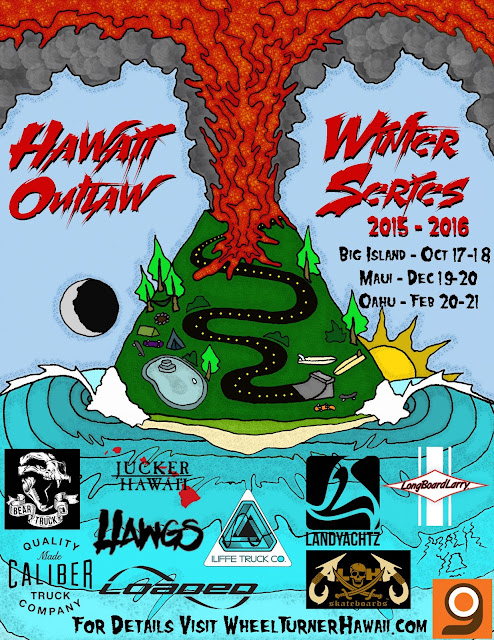 The holiday season has returned and while most of you out there are bundling up to escape winter's frigid grip we here in Hawai'i are still basking in the sunlight and skating our ears off every chance we get. The Hawai'i Winter Outlaw Series has been a winter staple for us in the island's for 6 seasons now, it is our yearly reminder of how incredibly lucky we are to live in a place that allows for year round shredding and it show's no signs of slowing down. As the year's go by the level of racing increases exponentially and the courses keep getting more and more challenging, so far this season is no exception. The Big Island boys started the season off proper with a maniacal hill on the slopes of Mauna Kea that put not only the rider's abilities to the test but their bravery as well with speed topping 60mph/100kph, surely that's no easy act to follow.

As December rolled around anticipation started to build over a favorite event amongst yearly competitors, The Maui Challenge. This year was promising to be more competitive and diverse than years past thanks to crews from Washington and California making the trip out to join all the regular island racers. The day finally arrived and we were up with the sun making final preparations while trying to control our childish giddy excitement for what was about to go down. 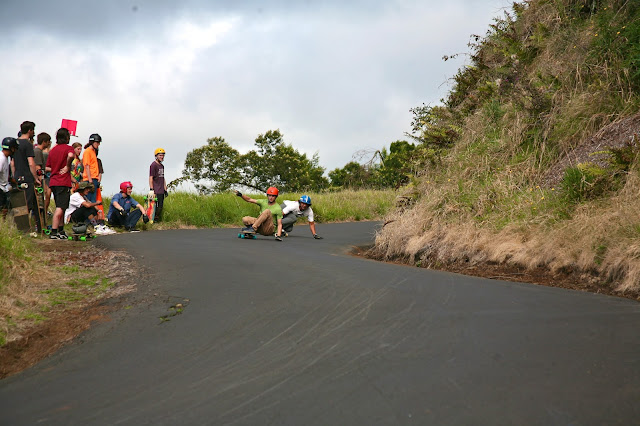 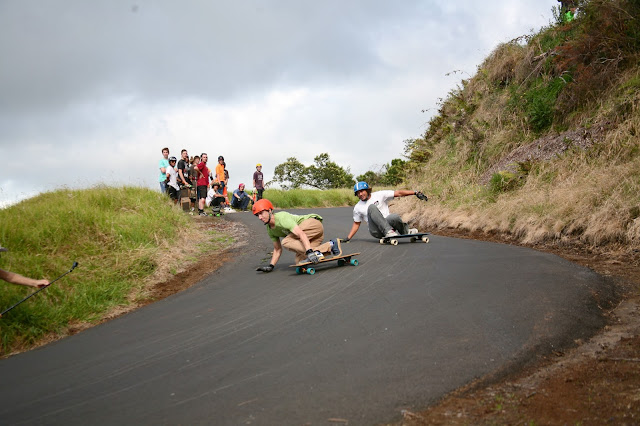 Nestled high up the volcano in a dense forest of eucalyptus trees adorned with glowing orange moss lies a 6 1/2 mile stretch of buttah asphalt that winds unabated through the valleys and ridges of an ancient lava flow, completing 22 hairpin corners and over 100 sweeping turns, that we affectionately refer to as the Lavender Farm. We chose a section of road offering 2 steep hairpin corners with 7 sharp kinks in between and started drawing heats. We decided to run 4 qualifying head to head heats; 1 point for a win, 0 points for a loss, after the 4 heats we tally the points and build a single elimination bracket to decide the winner. This allowed for tons of runs and plenty stoke! 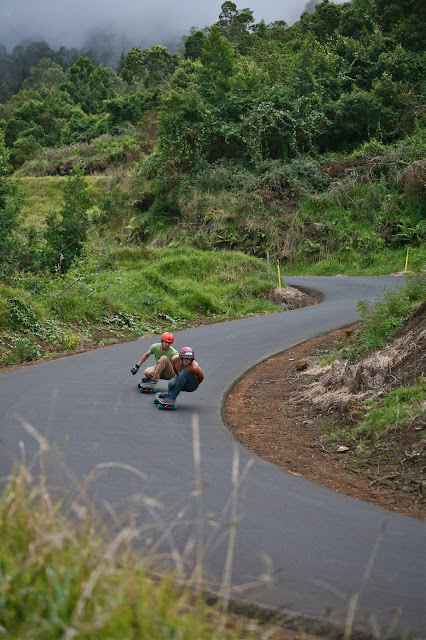 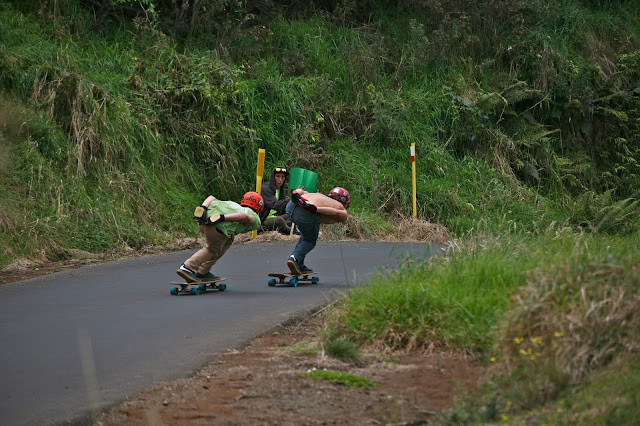 The course proved to be more technical yet far easier than what we had experienced last year, meaning that racing was tight from the start. The determination was evident on the field of faces, it was as if every skater firmly believed they had a shot at winning. After countless close heats and very little wrecks we had worked our way through qualifying rounds, separating the field and ending up with a STACKED 11 man bracket. Notable contenders included Washington’s Rain Daley, Oahu’s Kaimana Pinto and Kj Nakanelua, Byron Essert from California, French Canadian Matt Kienzle and Maui’s own Dakota Camp. (Matt K has won the previous 2 years.) 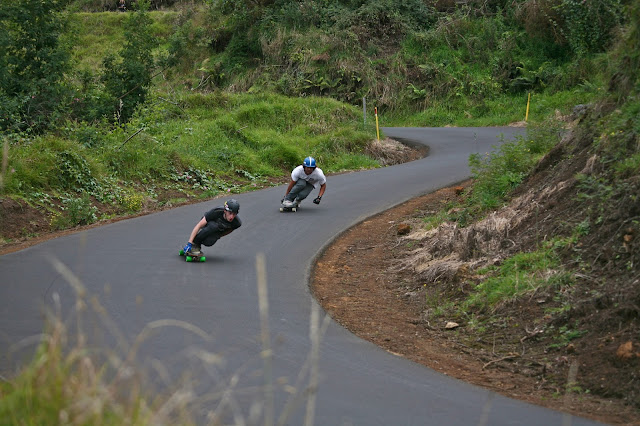 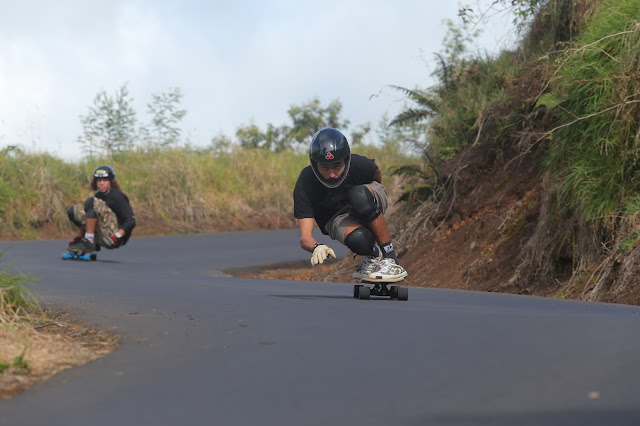 Following two more rounds of intense, close heats we had found our final 3 skaters and it was no surprise as they had been out shredding the competition all day. Rain Daley, Byron Essert and hometown hero Dakota Camp would battle it out for the 2015 Maui Challenge crown! 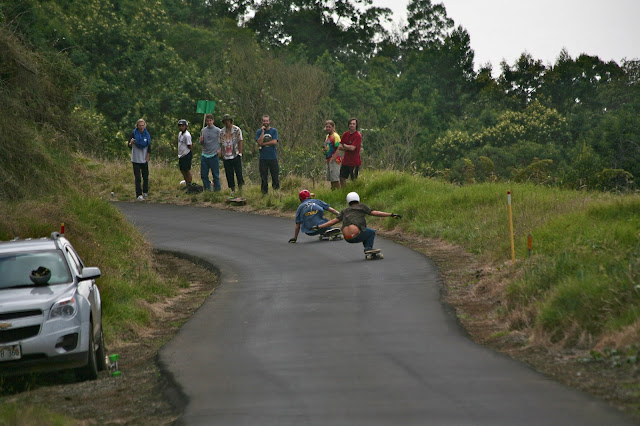 Byron shot out in front off the push followed closely by Dakota and then Rain. Entering the first dropping hairpin, which determines your speed for the less steep more curvaceous section ahead, the riders stayed in perfect formation as listed above. Everyone exits the corner with maximum speed and got in to a human centipede draft train nose in ass squeezing the deodorant out of their pits waiting for the one ahead to make a mistake. The mistake never came and line after line was absolutely nailed by all 3 finalists. They crossed the finish line in the order they started, Byron Essert in first, Dakota Camp second and Rain Daley third. What a day! 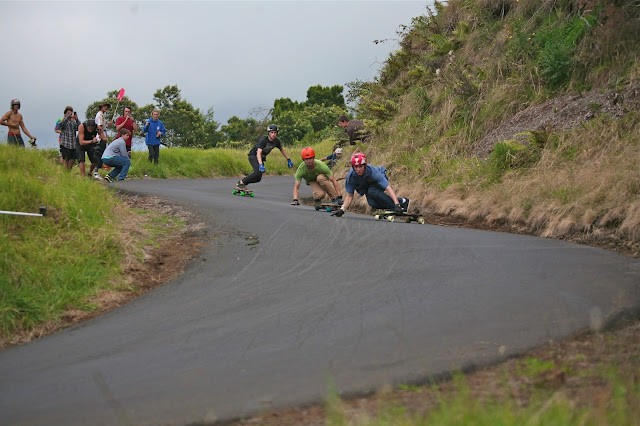 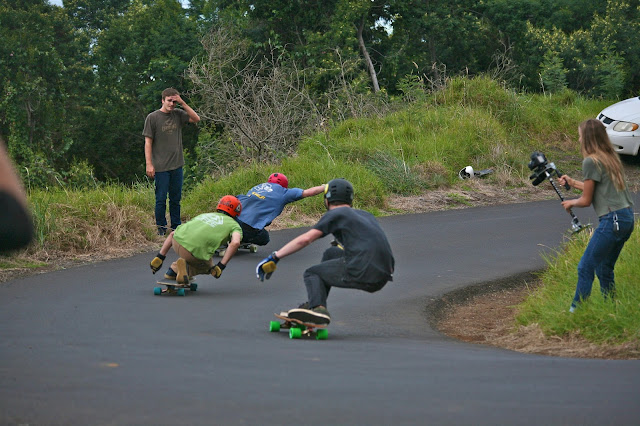 Huge thanks to all those in attendance, riders and spotters alike, and our generous sponsors. This day wouldn’t have been as memorable without all those involved.  Next stop is the Festival of Sugar and Love on Oahu in February to finish off another epic season. Hope to see you all there!! 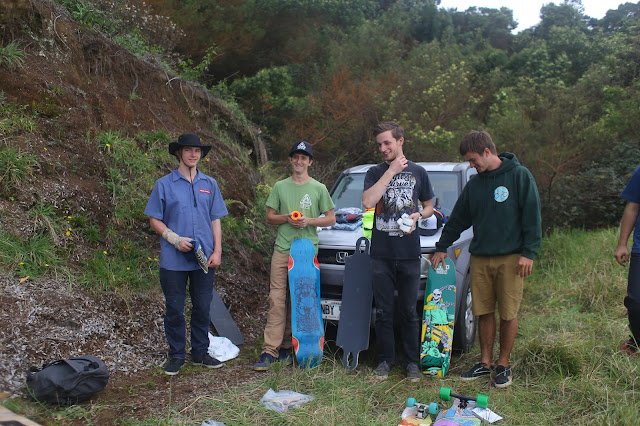 Posted by Mackenzie Yoshida at 4:36 PM