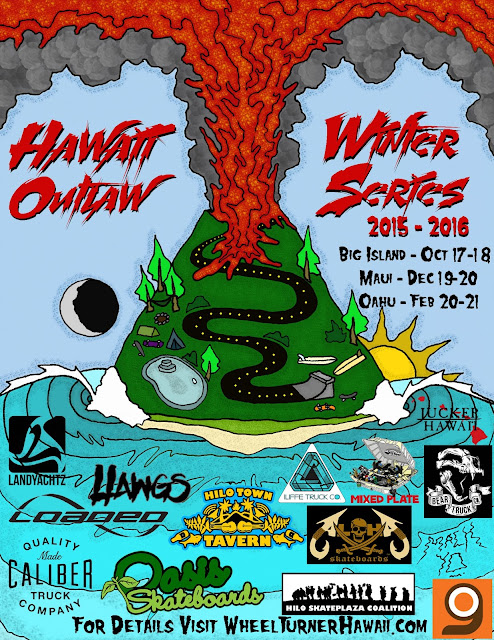 We welcome you back to the Hawai’i Winter Outlaw Series!

Winter has come back around once more. This hurricane season has been very active and we all have been waiting in angst for this time of year to come around again. And here we are, with the HWOS 2015-2016 Season!

Starting it off right, on the Big Island, the boys rallied down the slopes of the World’s tallest volcano, when measured from the sea floor, named Mauna Kea The day of the race was weathered with heavy rain, lightning and thunder, just like last year, but the rain alternate day proved to be a beautiful clear and calm Sunday. 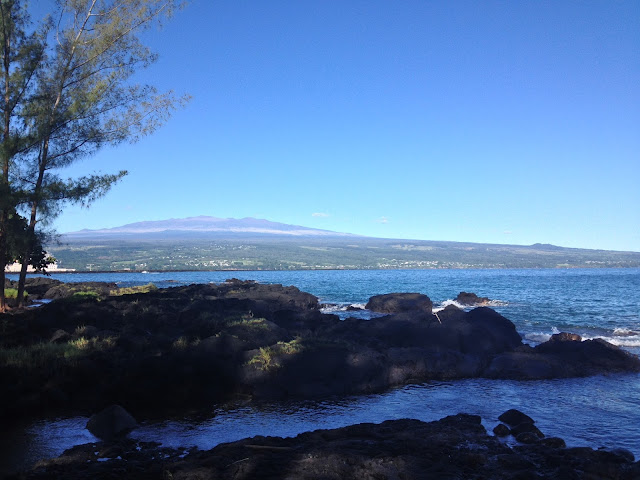 When arriving at the race hill on Sunday the course was not entirely dry, with some patches in questionable places and some slight debris. In favor of safety the course was relocated a mile up the hill to a very steep section. This new course was epic! Dropping in and already going very quick, a slight left right sweeper into a much faster (50mph+) off-camber right bender, across a straight and lastly dropping steeply through a drawn out left to the finish line. The warm up runs got under way quickly. Racers were chilling in the low 50’s with the faster packs touching up on 55+ mph. It was a quick rush to say the least, a direct injection of adrenaline.
There were a total of 13 entrants for the race, and with visitors from off island the Big Island boys had their work cut out. Entrants had traveled to the Big Island from Maui and as far away as Australia and Santa Barbara. The heats were drawn at the meet spot prior to arriving at the hill. During the very first practice run, Pat Welsh from Santa Barbara swung out a little too wide and connected with a reflector, ejecting him from his board. Pat hit the ground going WAY fast, lost his shoe and got majorly skirbed up. Big Island’s Noah Tadio also went down on the first run, wobbled out from the speed. They both champed it out and finished the run together. Pat dropped out of the race due to serious injury, and Noah continued on in his assigned bracket (he made it through and on to 8th place) The racers battled it out through the rounds til only the top 4 were left in the finals. Jack Bain from Australia, Dakota Camp and Zach Newman from Maui, and lastly Brian McOuat from the Big Island, racing to defend the home turf. 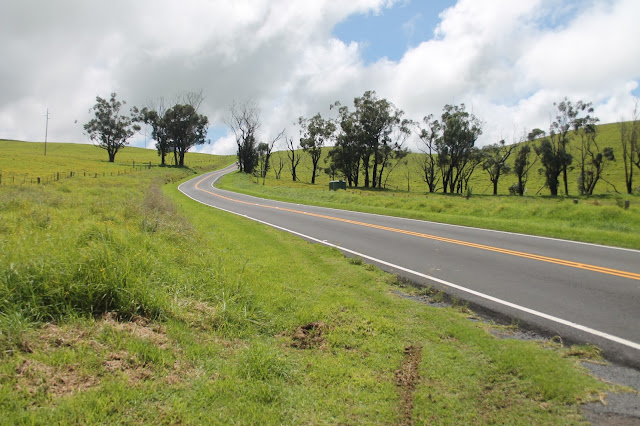 The heat got under way with myself pushing out into first followed by Zach, Dakota then Jack. Through the sweeper I held the lead, in the exit Zach was on me, with a little bump from Zach I wobbled out of the way, quick adrenaline shot, then it was back on. Zach squeezed by with Dakota in his draft bubble, around the fast right bender, I scooted in right behind them with Jack on my tail. Too late though, their draft pack had enough momentum to pull away from me and Jack. Zach and Dakota were taking off. Jack was following closely behind me eyeing his chance for a pass, as I kept the inside line Jack would catch me but never with quite enough momentum to pass. At the finish line Dakota was making for the last minute pass, but Zach held enough distance and speed to cross in first with Dakota very close beside him. Jack and I fly past a moment later nearly as close together as Dakota and Zach. Whew!! 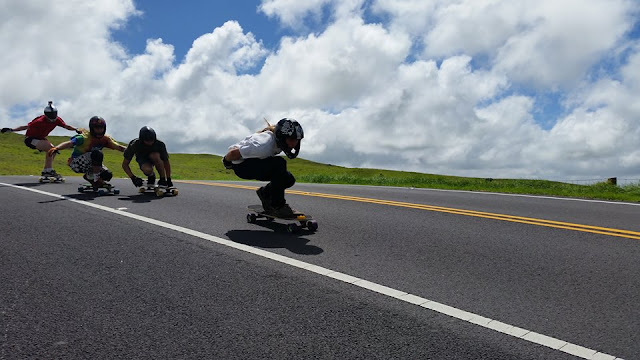 Heats were finished and everyone was in high spirits, the race was over and we were was back on Hawaiian time once more. We mellowed out with a few epic runs down the entire length of the hill. Dakota took a speedometer app on the run with him and clocked over 56 mph at the fastest section. No spills on the cruise runs, just epic times with beautiful views and a choice run to remember for a lifetime. 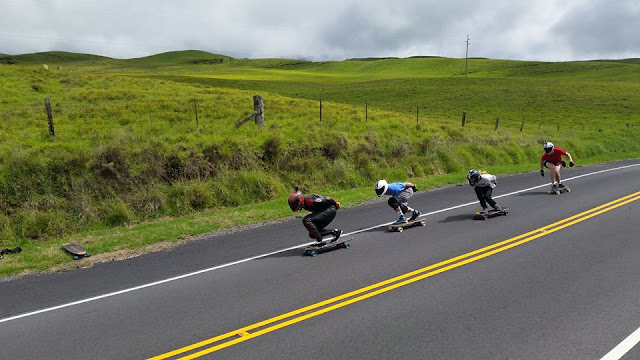 Back to the park headed the pack of mellowed skaters to dish out prizes and cash and to reminisce about the race. Before long the rain began to move in though and so the session was moved to the slopes of Mauna Loa where the boys had sessioned the day before while the course was rained out. But little did the group of skaters know, after having traveled up Mauna Loa ONLY 9 miles the day before, turns out that the run continued on for another 8 miles up the mountain… Only upon arriving at the very top of the run at more than 11,000 ft in elevation did the group realize what had just been discovered. The run totals out at over 17 miles long with an elevation change of nearly 5,000 feet. After melting our brains for a few minutes on the amazing views, the run before us and the amount of driving that was just done to get to the top of the mountain, the pack was finally ready for descension. I’m not going to describe much more about the run other than that if you haven’t made a trip to the Big Island to skate yet, you’re blowing it. I’m going to leave this tasty morsel in the back of your minds so that next year the HWOS Big Island Flow Fest will be an event on your calendar. 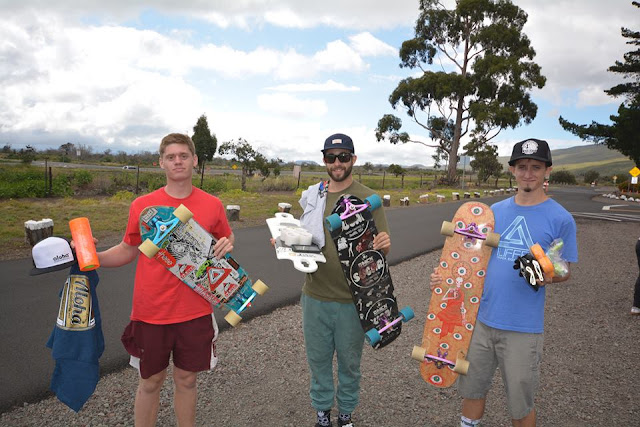 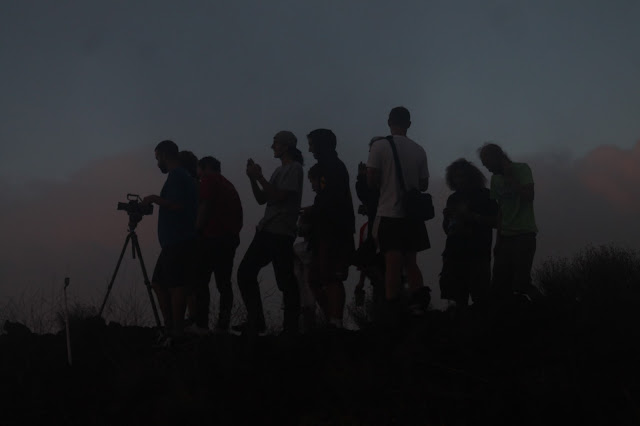 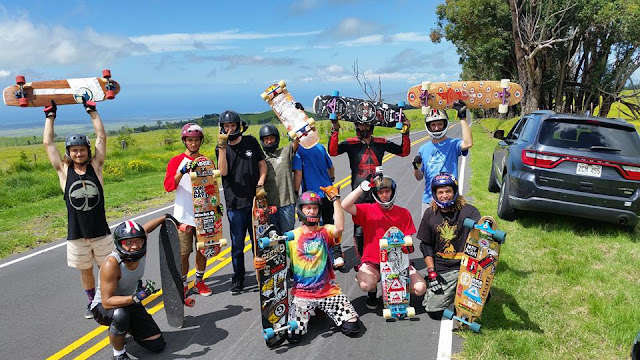 Coming at you from the Big Island of Hawai’i,

Additional Photos- Juston Littelton
Posted by Mackenzie Yoshida at 11:24 AM