January 2013 came around! It’s a new year. The Hawaii Winter Outlaw Series is on event 5 out of 6.  “ NOOOOOOOO! Don’t End!” …. You may be screaming in your head, but not to worry… the last two events are epic ones!
On Jan. 19, 2013… The 3rd annual Hawaiian Death Slalom x BDRCX edition went down on the beautiful North Shore of Oahu. The sun was shining, the weather was sweet… and 20+ racers were ready for another great event! 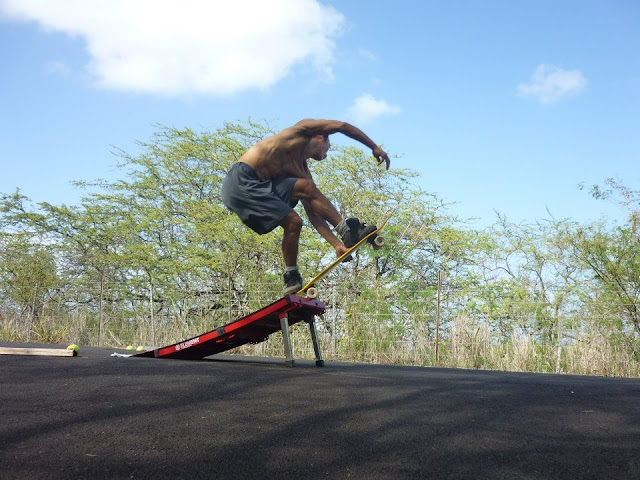 "Whoah, we had a race too. I forgot about it! Race number 5 I think in the Winter Outlaw Series. Death Slalom! Mackenzie Yoshida who is the man behind all these race (there are 6 races every winter) went all out for this one. It was some form of boardercross. Downhill racing, with slalom cones, kicker ramps and obstacles to ollie. I was still sick so I skated a little but didn't enter the race. I got some filming done and snapped some photos though. The hike up to the road took us past a coconut farm which I hadn't seen before. Suffice to say, within seconds Ethan was up a tree followed by two other locals. The race went smoothly, there was loads of time so mess around on the kicker ramps and get used to them. Ethan's mate Poseidon (yes, he is the God of the sea!) was pulling out 360's, finger flips and I suppose you would call it a finger shove it? He was rad anyway. Not much else I can say about the event, it was awesome, Mackenzie did an amazing job, good times were had, people crashed and people did rad stuff. It was a good day!" - From Daniel Hawes's blog. 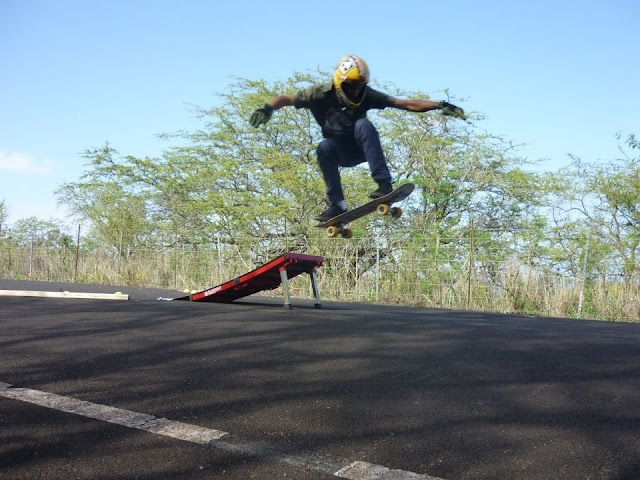 Wheel turners gathered at a beach park close to the race course to get signed up and briefed on how the event was going to go down. Riders had a bunch of questions about how the obstacles I had brought in my truck ( kickers, cones, planks of wood, ect) were going to be set up... but I figured id let them wait till we got to the hill to see how the course would be.
So, we headed over to the hill, lugged all the obstacles up the closed road… then I made the announcement that id be making up the race course on the spot. Instantly everyone started telling me how they wanted the course…. But I just mozied on up the hill placing cones, ramps and Ollie obstacles anywhere I thought looked challenging. Once finished the course was EPIC. 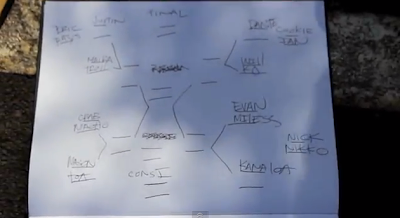 Racers had to run and jump on their boards to start. Then once on board there were two kickers to greet them. Following the interesting start riders are forced to weave through a series of tight cones… many forcing them to drift to stay on course. As soon as the road starts to flatten out they are greeted with a series of kickers, banked cone corners and barriers of wood to Ollie/early grab/ run over. All terrain skaters had the advantage! 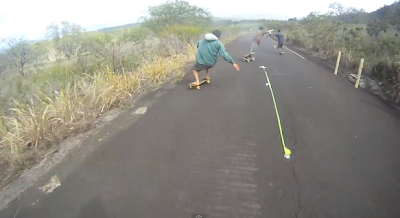 The course was set, riders got to test ride it for a bit, a 1 vs 1 race bracket was set up… and HawaiiDeathSlalom BDRCX got under way!
From round one we saw some entertaining racing! Some heats with multiple passes in the cone section, others with kicker crashes, some event with tangle ups at the starting board grab. But no matter if racers won or lost every one was stoked and amped to ride the course more!
Moving onto the next round we have our top 16 riders left and heats are stacked like always. There is also still a nice mix of speedboards and dub kicks in the brackets so it’ll be fun to see which plank o wood will win! 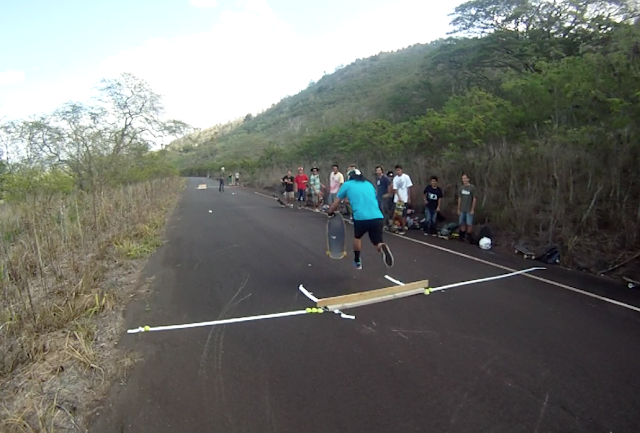 Run, Early grab or Ollie... they all work. 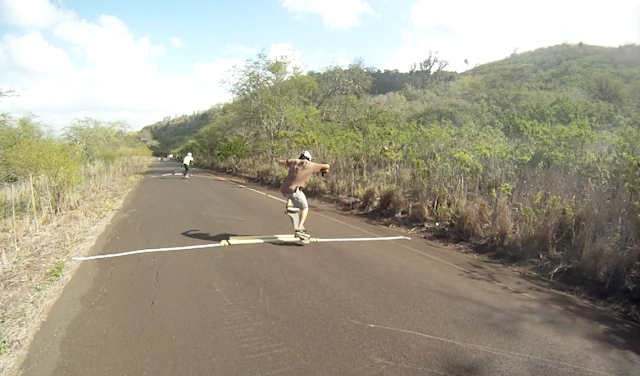 Another round of intense battles were had, and we were onto our top 8! Rhys vs Maika, Macho vs Toa, Dante vs KJ and Miles vs Nikko.
At this point of the event it looked all racers had a planned strategy planned out in their head... A place to pass, to sand bang or not to sand bag, block the other rider… but applying what they had planned in the heat of the moment seemed to be a challenge for most. 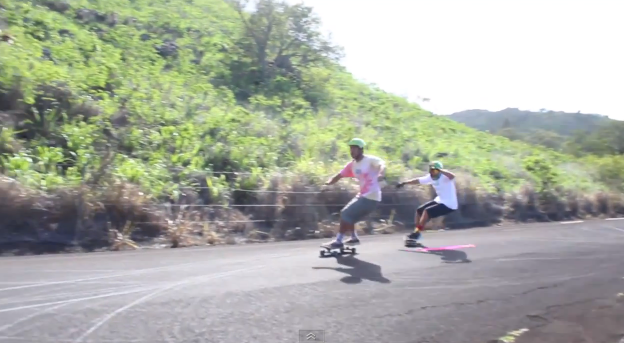 The ones that held it together and kept their line the cleanest, moved on to the semi finals!
Heats were Maika McWayne vs Dante Alston and Toa Nanpei vs Nikko Kamanuwai. All SHREDDERS, 3 dub kicks, 1 speedboard. 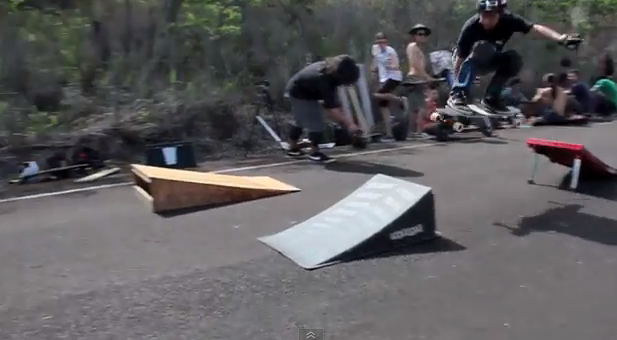 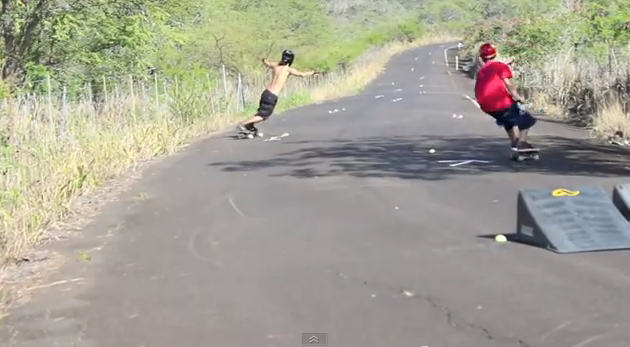 First off down the hill was Maika and Dante. Both of them started quick and made it through the first kicker smooth. They went into the cone section close. Dante was able to force his was into the perfect lines, pushing Maika wide making him slide out. From there Dante held a solid gap for the rest of the heat. 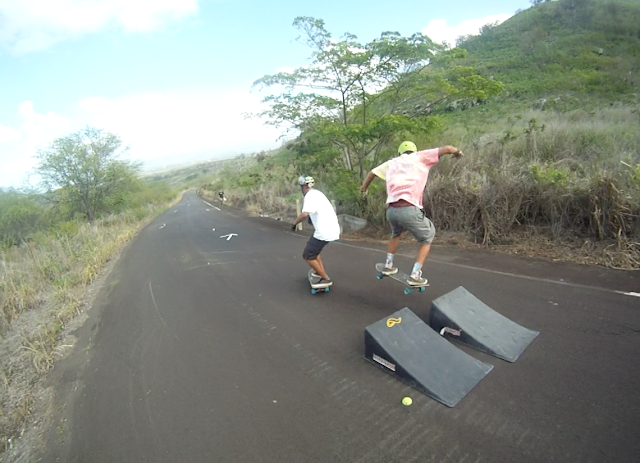 Next up was Toa and Nikko. These two also had a clean start and went side by side into the cone section. Toa held it together through the close racing but Nikko slid out trying to stay on his ass. BUT Nikko jumped up and went charging down the hill to chase Toa… no giving up! Once the riders came into the first Ollie obstacle Nikko closed the gap. Once they made it over, Nikko made the swoop in the next cone section, forcing Toa to miss a cone. Both riders were neck and neck at the finish but Nikko moved onto the final.

We fixed up the course for the last round, then our finalist headed back up the hill.
First down the hill was the Consi’s. Maika vs Toa. These two both stayed on board and kept it clean through out the course. A flawless consi! But making it down first, steezing it out all day, was Toa Nanpei! 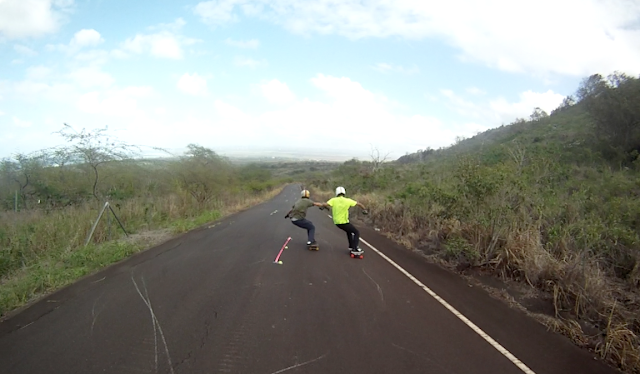 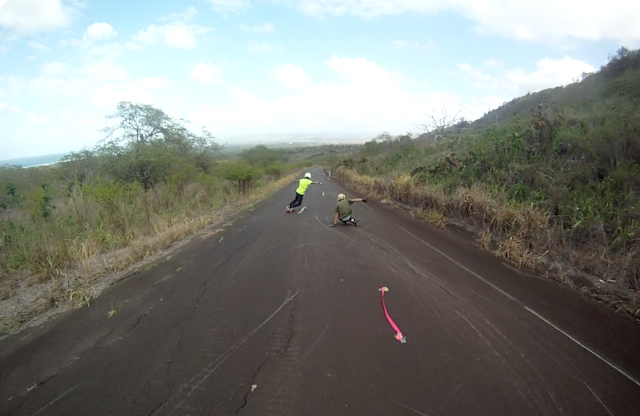 Now for the finals. Nikko vs Dante. Both riders are quick to run to their boards off the start. Making it over the kickers with no problem. Nikko gets into the turney cone section first, but its not long before Dante makes a pass on the inside. Nikko is able to hold it together and make it inside Dante by the next cones…. BUT the quick maneuvering threw Nikko off a bit forcing him to drop a hand and slide out. Nikko was quick to get back on board, but It wasn’t enough. Dante got a gap flying fast and clean down the rest of the course to come across the finish in 1st place, with the only speed board in the finals! HIS 3rd HWOS SERIES WIN THIS SEASON. Dante has now claimed half of the series. There’s no stopping this kid! 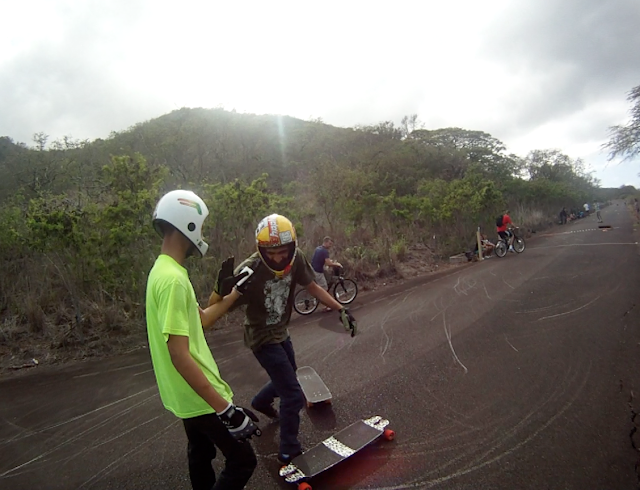 Following the finals riders skated the course a little more before cleaning up. Then we headed down the hill and across the street to the beach for some awards. All of our top riders were STOKED on the schwag and cash they received thanks to our ALWAYS supportive sponsors. Completes, decks, trucks, wheels, gloves, glasses, tees… everything any skater could dream of getting. Plus some!
One more Hawaii Winter Outlaw Series event SUCCESSFUL. One more to go for this season!
Thanks to all the riders for showing up, helping carry ramps and shredding.
See you guys at The Festival of Sugar and Love 5!

a HUGE mahalos to…

Posted by Mackenzie Yoshida at 3:55 PM