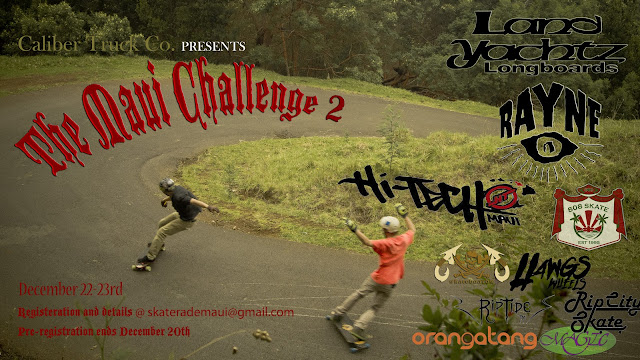 The holiday season has rolled around, so we decided to treat ourselves by hosting the Hawaii Winter Outlaw Series event 4 at one of the best skate destinations in the world… Maui, Hawaii. This island is blessed with the best EVERYTHING. The plants, waterfalls, mountains, roads, ditches, fruits, skate parks … once you experience them, you will never stop dreaming of it. We are stoked the HWOS had a chance to experience it for a second year straight. 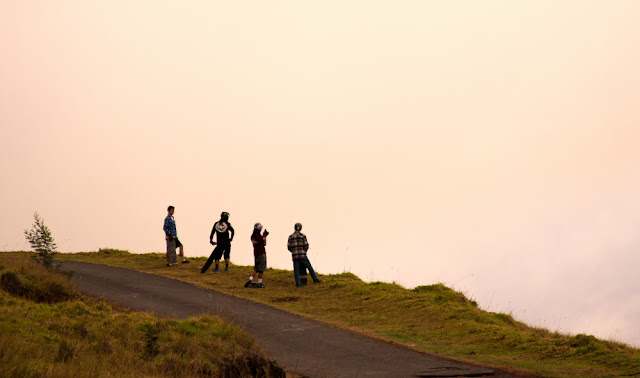 The Maui Challenge 2 was like a joined Hawaiian island skateboarding festival for a week straight, though the event was only 2 days. Clans from Oahu, Big Island, Cali, East Coast and Maui started to gravitate to the mountain a few days before the event. Naturally they all set up camp on one of the BEST hills in the WORLD ( right next to a dropping left hairpin) and got to exploring. 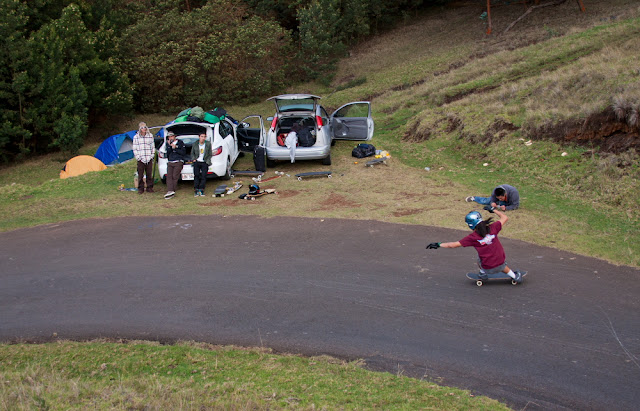 After all kinds of adventures the crews had been through the first few days, the weekend was here and it was time for the 4th event of the Hawaii Winter Outlaw Series. The Maui Challenge 2 kicked off its first day with a day long freeride/ slide jam held on the most epic hill out there. Skinny, butter smooth, black top… no straights, just bends, drops and hairpins… oh and it goes for MILES. 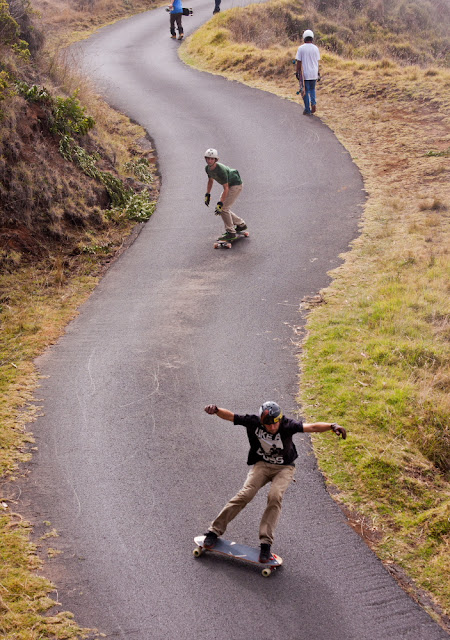 Since there are literally like 40+ turns that are sessionable for a slide jam, we just started at the top and worked our way down eliminating riders every time we would change turns. Normally judging our slide jams take a bit of time to judge cause everyone SHREDS… but this time we had Sector9/ SkateHouseMedia.com’s Matt K doin the judging. SO if he didn’t like it, you were out! 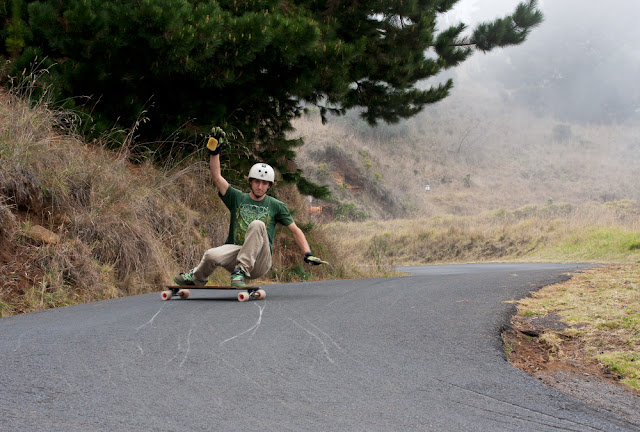 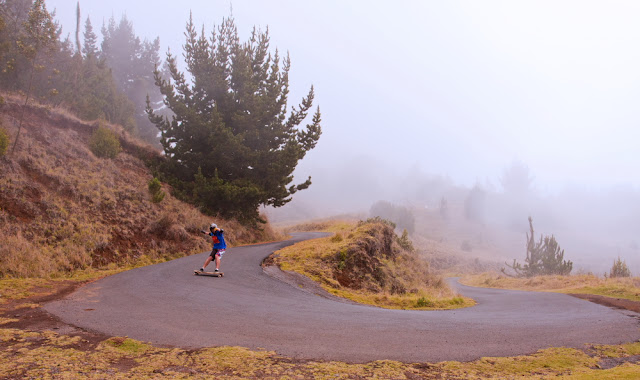 Rider’s killed the first few turns for about an hour straight. Big standies, ollies and early grabs, hands down race lines…. All kine styles were brought out for this jam. But now we were cutting the riders pool in half, leaving out top 16 riders to move onto the final turn. 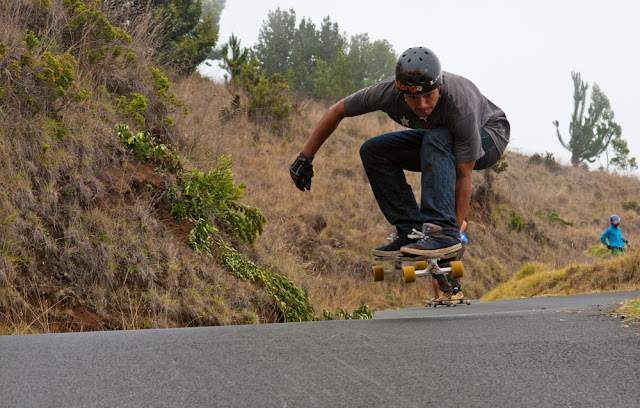 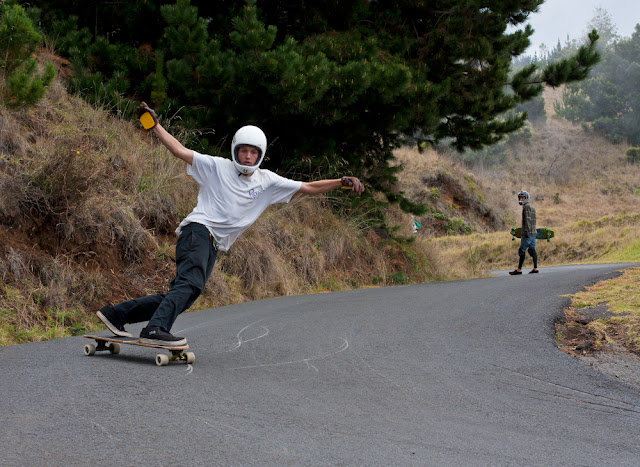 The last round was held on a left bend to dropping right hairpin, lots of options for different lines in this zone. Through out the whole 30 minutes ish riders were given to sesh… every one of the top 16 went hard. And we still had skaters from all 3 islands in the jam, each crew bringing their own unique style.
Once everyone was worked and wheels killed it was time for the awards. The Maui crew decided to give out ALL of the schwag for this slide jam, saving all the cash for the race the next day. So the top 10 got loaded with awesome gear thanks to our supportive sponsors! The top 5 riders( Dakota, Zach, Kaimana, Evan and KJ) walking away with completes… stoked. 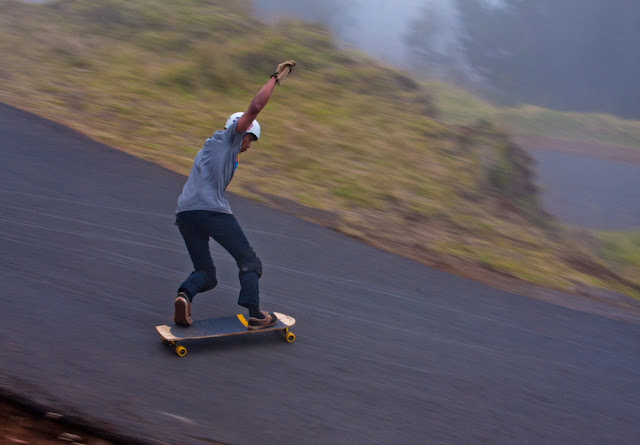 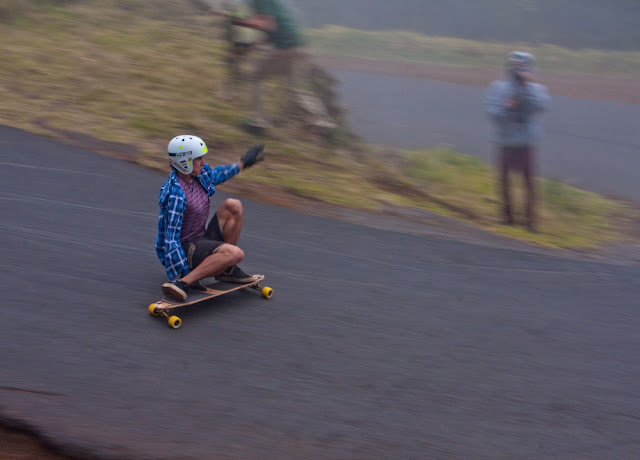 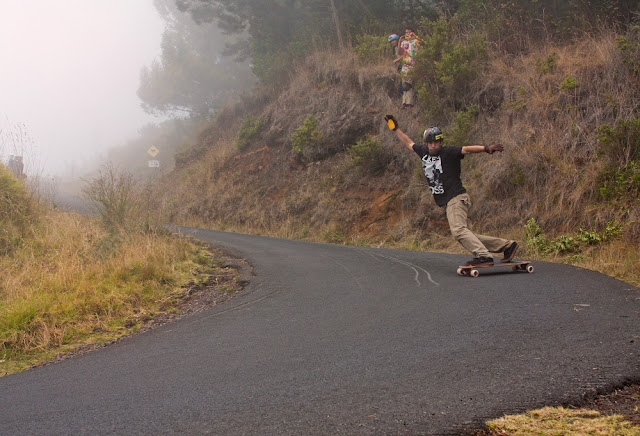 On Sunday riders all gathered early, race ready! Nearly 35 amped racers. We got the brackets set up and headed over to the race course. A housing development area with no built houses. Closed to cars. Fast sweepers at about 40mph with a tricky 90* left turn to the finish line. 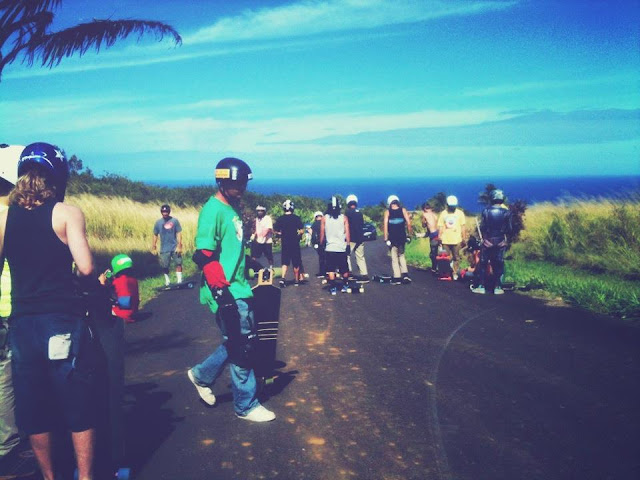 We took several practice runs and got real comfy with the course, then headed up the hill for the first round of the race. As we start up the hill, an agro unko (who is the property’s landscaper) suddenly blocks the road, ejects from his car and SNAPS at the whole crew of nearly 50 skaters and spectators… trying to fight any and everyone. The way he came at us he probably deserved to get a beatdown. But we stayed respectful, tried to talk to him… then left after he started punching windows, driving into trees and what not. Too much negative vibes. 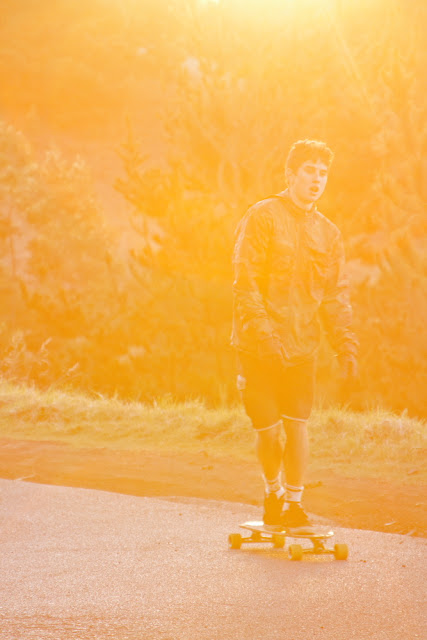 But that ain’t no thing for the Hawaii Winter Outlaw Series… we just changed courses to another epic zone. The new course was another grip and go road. Constant bends, corners, ups and downs… pretty much a roller coaster, on freshly paved butter. No complaints there. 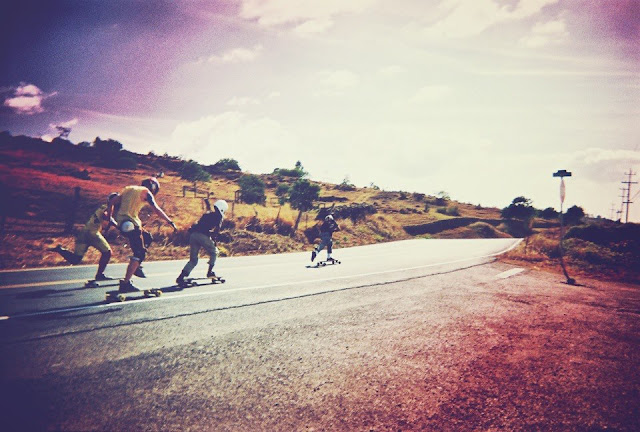 Everyone was familiar with this course since we’ve been sashing the crap out of it the previous days, so we went straight to racing. The 4 man heats lined up at the start line which was in the middle of a little town… we even had some cheering locals as we’d push by. Racing was close and intense from the very start. The first section of this road that we are racing is nearly 5 miles long. Getting in front and killing your legs the whole time wasn’t always the best call. 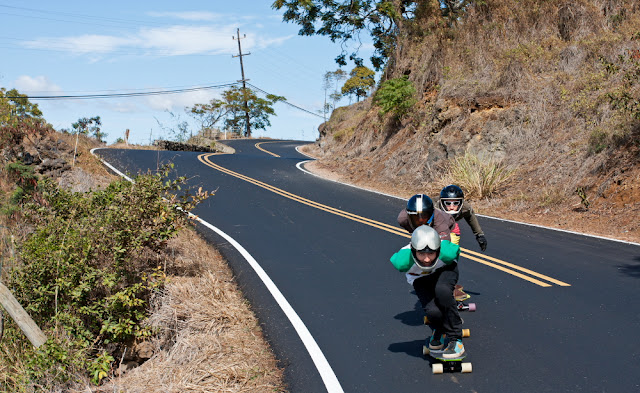 Once round one was complete, legs were hurting, adrenaline was high and we had our top 16 racers for the Maui Challenge. Everyone thought round 1 was tough… stacked is an understatement for round 2. And we have a good mix of racers from all across the U.S still in. 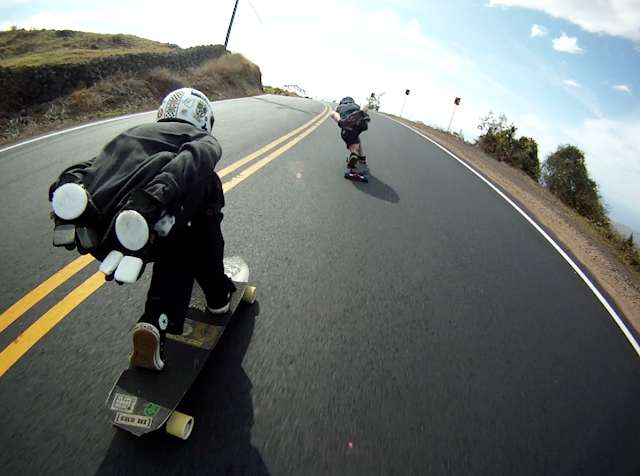 Round 2 was set to race the second half of the road, which is a different course from round 1. So it kept things interesting, racers couldn’t get too set with their lines on the hill.
Again, 4 man heats lined up and started racing down the buttery curves. Sadly in my heat this round me and another racer connected in one of the first sharp corners of the course. Which resulted in me ejecting off a drop off and getting pretty damaged so didn’t get to see much racing… but everyone said it was another close round. And I believe them!
Top 8 of the Maui Challenge. Nothing but shredders. Rhys, Dakota, Keola, Nikko, Maika, Michael, Dane and Jeff. Two heats of back to back passes. Tuck power and strategy was a big factor, and all of these semi finalist were ninjas at both!
Coming out on top of the semis and moving onto The Maui Challenge finals was Jeff, Rhys, Dane and Keola. 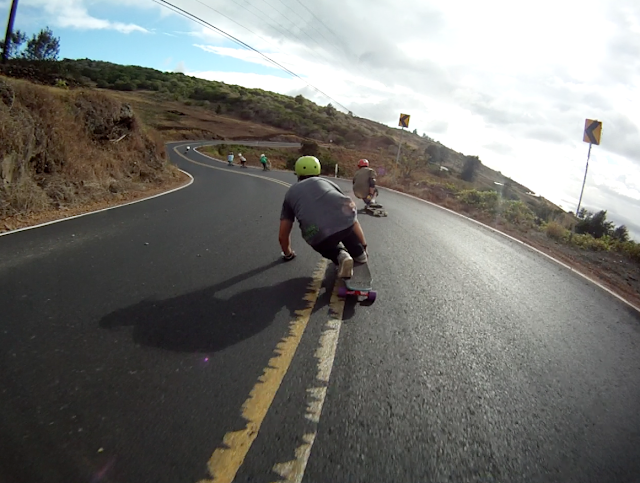 These finals is gonna be a leg burner! The two sections we have been racing were now combined to make one marathon race course which will take over 5 minutes to make it down… in your full tuck.
The heat is off. Throughout this whole heat there were constant passes from Jeff, Rhys and Dane. Which left Keola lurking in the back. The front three were going back and fourth, drag racing to get ahead in some of the straights. BUT as the racers came into the final 3 turn squiggle, KEOLA makes his move going from 4th to 1st with in a couple turns, Crossing the finish line as the NEW MAUI CHALLENGE CHAMP. He kept the same racing method all day and it paid off.
Following the race the top 8 were treated with light schwag and heavy CASH! Smiles all around.
We spent some time reminiscing about how rad the trip was and started to pack up our gear since most of us were to leave that night. Another successful Hawaii Winter Outlaw Series event. Big mahalo to Zach, Kaimana and the whole Maui crew for getting the event running smooth. Aslo a HUGE THANKS to all of the sponsors who helped. Our scene is growing bigger and better by the event. We greatly appreciate it. 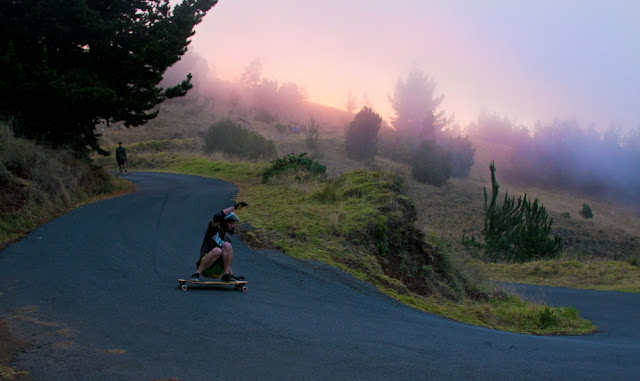 The next event will be Hawaiian Death Slalom which will be held on the North Shore of Oahu. Be ready for an event like no other on the islands. Just a little heads up… come with gear ready for slides, obstacles for ollies/ early grabs and ramps! See ya soon!
Photos- Pono Costa, Mason Valenzuela and Mackenzie Yoshida
1st Keolanui Chu
2nd Dane Webber
3rd Rhys Morishima
4th Jeffery Khau