HawaiiWinterOutlawSeries Event 3- The Scorcher 3. Write up, photos and video! 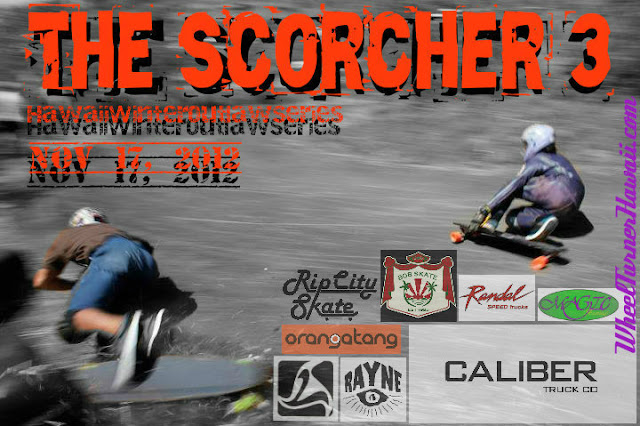 November in Hawaii. Great weather, visiting wheel turners, amped locals... The Scorcher 3 Invitational... a great time to be on the Islands! We gathered on a Saturday morning, got all 24 invitees signed up and we headed out to the racecourse.
The Scorcher is the gnarliest racecourse that the Hawaii Winter Outlaw Series has to offer. Three, steep, narrow, back to back hairpin turns with pavement full of holes, cracks, ripples and gravel. Finding the right line here is HARD... no matter how good of a skater you are. Because of these harsh conditions, we moss baled up the " Caliber Causality Corner" and ran heats 1 vs. 1. 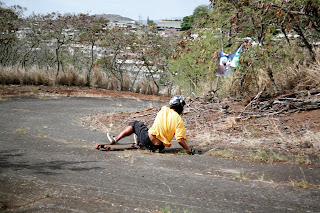 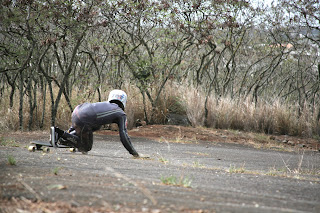 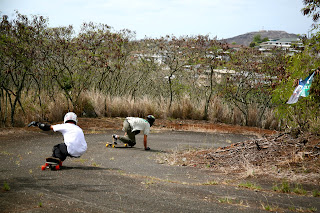 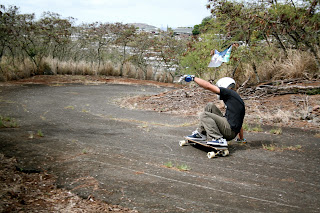 After about 30 minutes or so of practice runs to get the out of towners acquainted with the road, heats got underway.

vVvVv Lots of big names dropping ( to the ground ) in round one, like Ethan Lau. The Causality corner isn't named that for nothing.  vVvVv 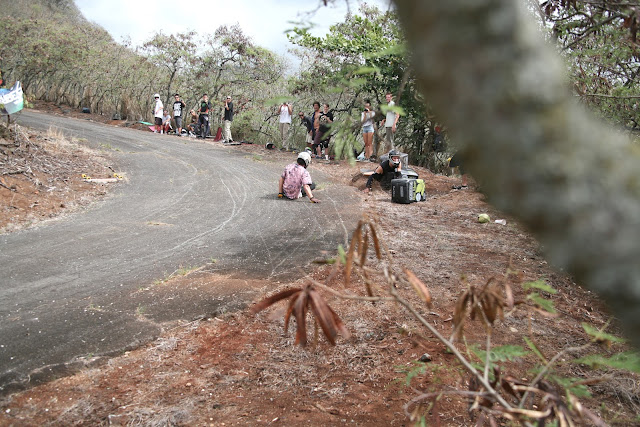 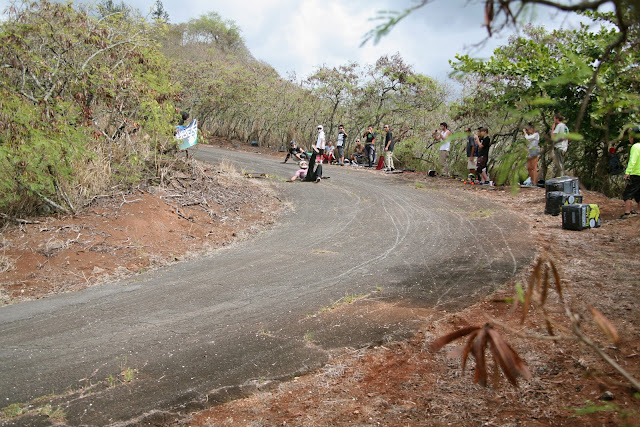 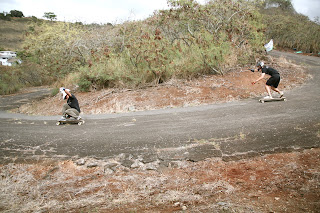 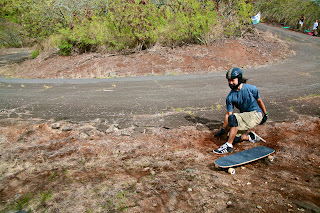 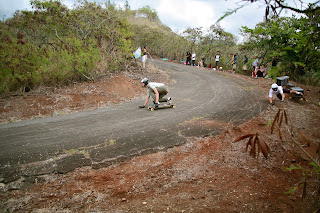 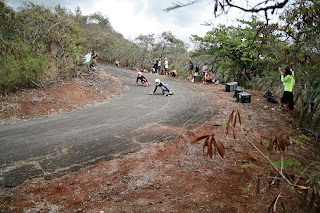 Once the prelim rounds were through, we had cut the bracket in half... lots of the top names in the race series already eliminated! 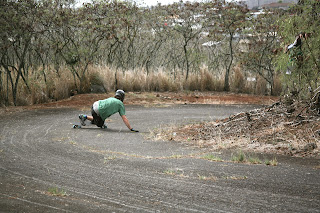 Aussie Gabe taking a stroll in-between race runs. Thanks Gabe for coming out and filming!

Now we are down to our top 8. Heats are NickS vs. DanteA, KJ vs. NikkoK, Cookie vs. MaikaM, and EvanTwigg vs. BenF. All of these heats stuck together from beginning to end, not letting any bumps or potholes get in their way. The bottom two hairpins were the deciding factor... high exit speeds out of the corners (which is very difficult with the inconsistency of the pavement) scored the wins.
After the heats duked it out, we are down to our final 4... 3 of 4 racers under 18 years old! The youngans are holding it down on the gnar. 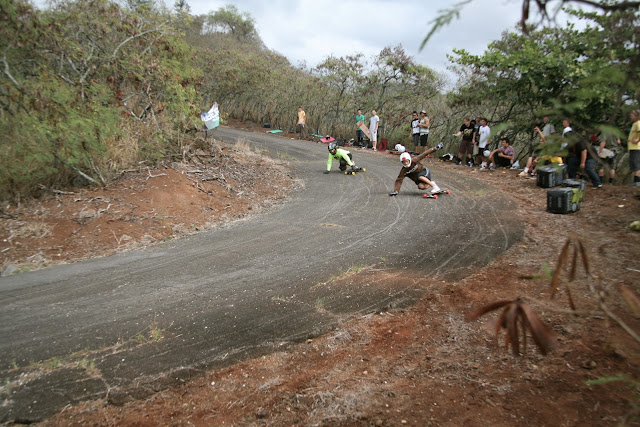 This heat between Nick S and Dante A was sick!

The semi finals are on. First heat is KJ Nakanelua vs. Dante Alston. Dante was able to lock down the front position off the kick and maintain through all 3 turns with KJ closely tailing. The last turn was TIGHT.... but he was not able to squeeze by. 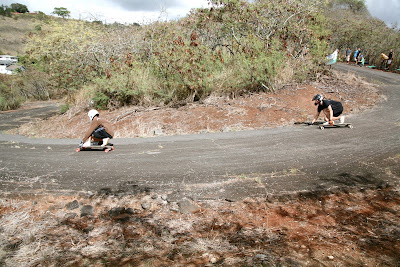 Next up in the semi's is Tommie Cookie McClain vs. Evan Twigg Smith. THESE GROMS ARE RUSHERS. The two were next to each other though the first turn and the steep, bumpy, straight away... riding with a human on this road is hard enough. These two were sharing it side by side barely missing the holes. Approaching the Causality Corner, both goofy footers were confident and full tucked. Evan threw his pre drift but failed to link back up where he wanted causing him to slide out wide. Cookie took his chance to try to pin the opening, but couldn't make it and was forced to throw a second drift to avoid Evan. Both kicked their asses off after the turn into the last hairpin. Evan making it across the finish first. 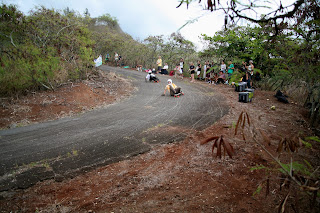 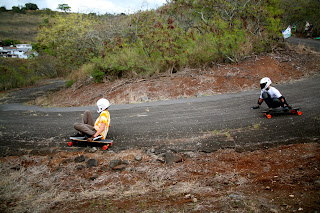 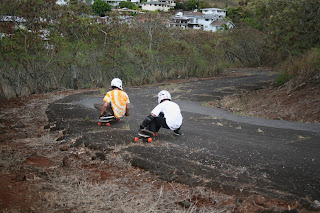 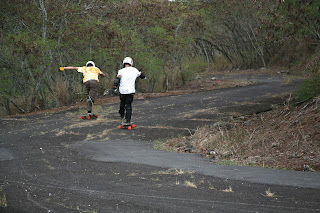 BOOM. We have an all grom final. Dante Alston vs. Evan Twigg Smith and KJ Nakanelua vs. Tommie Cookie McClain.
Consi's are up first. Kj takes the lead through the first turn into the straight. Cookie in his normal spot... right in the draft bubble. As they drift for causality corner, Cookie goes for the inside line... but KJ holds his line perfect, blocking Cookie out. These two were nearly leaning on each other in the turn! Coming across the finish line in first was KJ... talking 3rd overall and Cookie 4th. 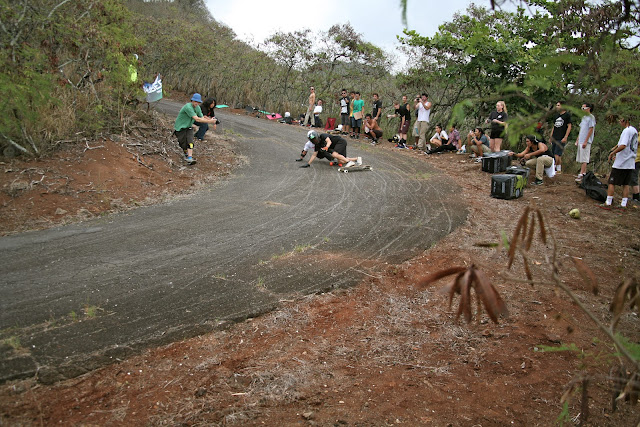 Cookie is so close to KJ you can barley see him!

THE FINALS ARE UP. The crown is surrounding the course. Riders are nervous and vibes are INTENSE! To top if off, a little drizzle is dropping from the blue sky.
The heat is on. Dante kicks into first. Coming out of the first hairpin, Dante starts to gap Evan through the steep straight. As they approach Caliber Causality Corner, Dante takes it clean like he has been all day and solidifies his gap... continuing on with a clean run to finish in first. Dantes wins his second Hawaii Winter Outlaw Series event in a row! 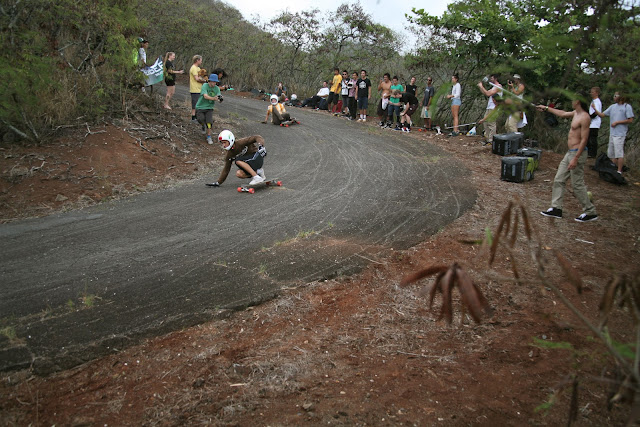 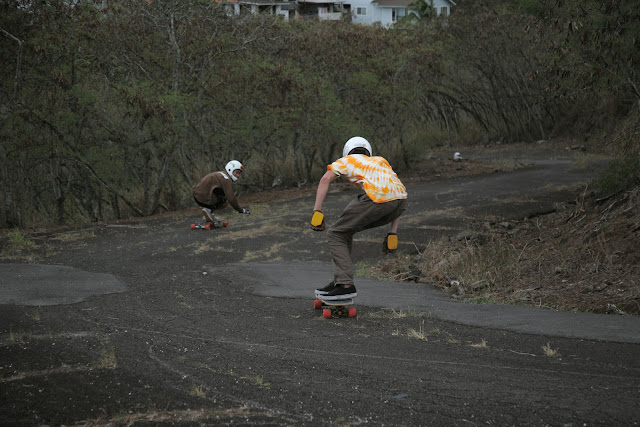 Dante takes a last look back before taking the last corner and finishing in 1st.

Following the finals and course clean up, we headed over to a local garden to award skaters with schwag. Every rider to compete went home with some goodies and the top 8 went home with some prime time gear, and cash money. The 4 podium riders were stoked… pretty much enough parts for a complete and a good amount of dollah bills. Everyone deserved it. We all survived the road!
BIG MAHALO’s to all of the sponsors who helped us out. None of this could happen with out your support! 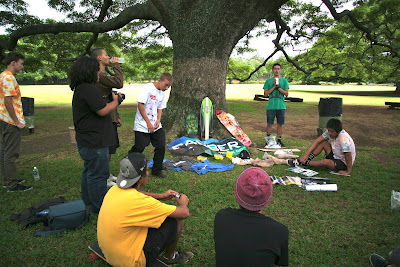 Mackenzie getting the prizes ready. 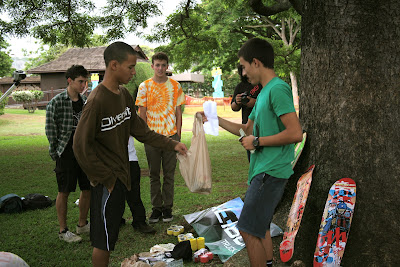 All photos taken by WheelTurnerHawaii.com

Next up is The Maui Challenge. Get your flights booked, cars arranged and camping gear ready. It’s going to be a good one. Check back on WheelTurnerHawaii.com for more info soon!

Posted by Mackenzie Yoshida at 3:43 PM