Here's the Hawaii Winter Outlaw Series video, made by Caleb Manibog. He always comes through with the BEST event videos!
Posted by Mackenzie Yoshida at 8:40 PM No comments:

Here on Oahu, The Hawaii Winter Outlaw Series kicked off this past and boy are we off to a strong start. The Hawaiian Ridge Rusher was the first race of a six race series that will be taking place over the next half a year. It was a beautiful sunny morning on the north shore and we had 35 racers signed up, stoked, ready to go. 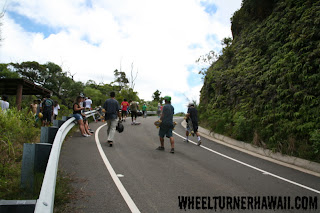 After having a brief last minute sign up and riders meeting, the skaters were told how to get to the race hill. The road was familiar to some but new to many… so there were several confused looks when told where to meet. When everyone regrouped at the end of the paved road, we started our hike. The new comers were doubtful. The vets were quickly jogging and riding the rough, dirt trail… But when the dirt turned to butter smooth pavement there wasn’t a doubt in anyone’s mind that this was the perfect venue to kick off the H.W.O.S. season. 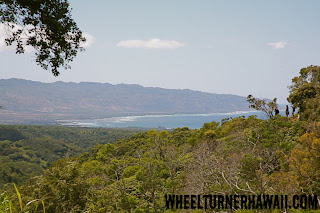 - The view from the race course
Everyone was given some time to get in some practice runs on the smooth, closed road. The course started with a steep straight dip followed by several sweepers, which took you through flats, uphills, and more dips that kept riders quickly moving the whole time. Every single racer was on their top game, holding their tucks and taking perfect lines on the hill from the first run of the day. 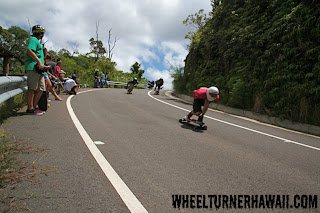 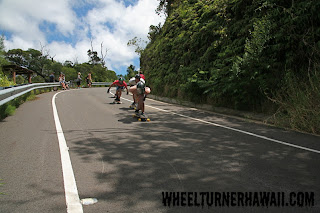 Keola in front of a tight 4 man practice heat
When everyone felt comfortable, riders were gathered into their set heats and sent up the hill to start round 1. There were 3 heats of 5 riders and 5 heats of 4, making 8 total heats in the first round. This event we had a limited push area, but we gave riders an option to start however they want. Racers lined up, and waited for the “ rock start” (a rock was thrown and once it touches the ground heat was started) to get heats going. 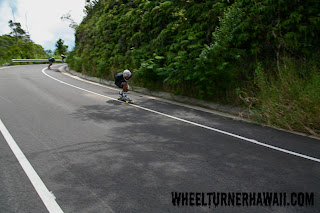 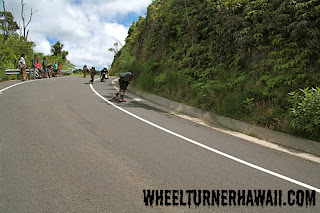 Overall 4th place racer Mackenzie Yoshida leading the pack in the first round.
Now we have our top 16 ( who get an automatic invite to event 2) which is our quarter finals. The heats are stacked with shredders, some repeat series racers but many first time HWOS competitors. Everyone was getting comfortable racing on the course so there was some fighting going on for the inside line through the turns. Racers battled it out in some close, fast, action packed heats, and the top 2 from every heat went onto the semi finals. 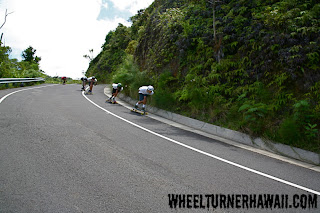 Kenny Bergsrtom in front of the line. He ended up getting 3rd overall!
These last two heats are some of Hawaii’s fastest skaters and it made for some good racing. The heats were full of passes and strategic moves all the way down to the finish line. Coming out on top of their heats, making it on to the finals was Nikko Kamanuwai, Ethan Lau, Kenny Bergstrom and Mackenzie Yoshida. 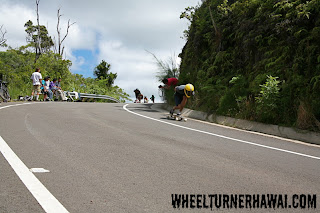 Overall 1st place racer Nikko Kamanuwai was looking flawless all day.
The consi’s skated down racing for 5th – 8th while the racers in the finals got geared up. When everyone was ready, they got the ok to start and the rock was dropped. Nikko instantly ran out into first, closely followed by Ethan, then Kenny and Mackenzie. Coming down the first dip Nikko held his lead with Ethan on his tail as Kenny and Mackenzie spent time rubbing shoulders in the bends. When entering the turns the racers were in a tight line and it stayed this way till the finish. I almost want to say it was the only heat of the day with no passes! 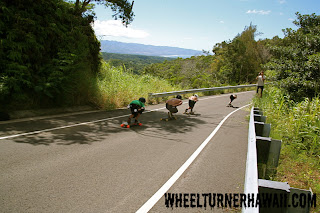 The Consi's.
Tearing it up looking flawless all day taking 1st was Nikko kamanuwai who was closely followed by Ethan Lau. Kenny Bergstrom who is freshly back on board after being out for a few months from a accident took 3rd. Rounding out the top 4 was race organizer Mackenzie Yoshida. 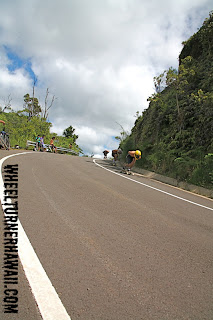 The battle for the win.
We finished racing the consi bracket for full placing, hiked out, and headed to the beach for awards. The top 8 placing racers were awarded money… 1st place getting the big Caliber Truck Co. check, which was 10x their entry fee!!! They also got some goodie bags that were full of all the gear they need to keep shredding. 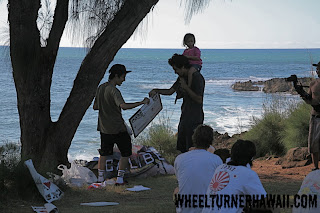 Nikko Kamanuwai receiving his check for $150 and a bunch of gear. 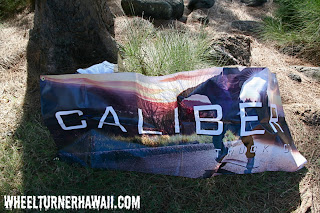 Caliber Truck Co was a huge help.
Event 1 was a huge success and a great start to the series. The scene here has grown tremendously since last winter and will only continue to grow through out the season. Mahalos to all of our sponsors for keeping the scene stoked. The Scorcher2 invitational is the next event and will be on October 15. The top 16 from this past event is automatically invited, but everyone else… hope you get contacted.
Thanks for making the start of the season a good one, hope to see everyone at event 2! 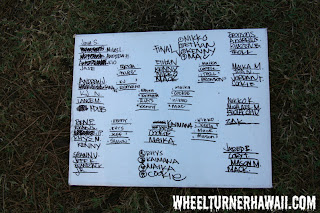 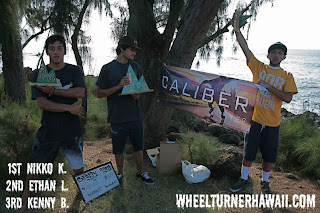 HawaiianWinterOutlawSeriesEvent1- The Hawaiian Ridge Rusher VIDEO
Posted by Mackenzie Yoshida at 12:02 AM No comments: 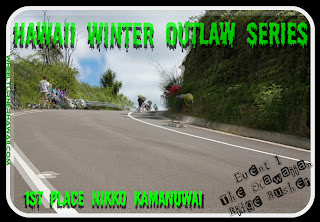 Nikko raced solid all day and took 1st place at this past weekends HWOS event 1. More photos, videos and a write up to come soon.
Posted by Mackenzie Yoshida at 10:34 AM No comments:

The Hawaii Winter Outlaw Series event 1 is done. We had 35 people enter and everyone was shredding!!!
Coming out on top after numerous rounds was
1st Place Nikko Kamanuwai
2nd Place Ethan Lau
3rd Kenny Bergstrom
4th Mackenzie Yoshida
Full write up, photos and videos to come soon!
Posted by Mackenzie Yoshida at 8:24 PM No comments: 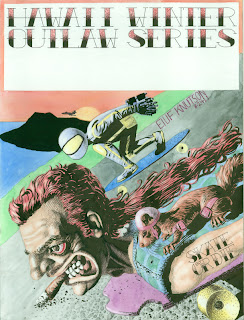 Sep 24, 2011
Meet @ Sharks Cove/ Pupukea Beach Park
10am SHARP
$15 Pre Reg Entry fee ( Send name to stokedskaters@aol.com to pre reg )
$20 day of the race
This is the first race of the Hawaii Winter Outlaw Series and its going to be intense! The closed to car race course is a little under a mile on butter smooth pavement. Riders will start with a limited push going into the starting dip. This section is a little let and gravel covered at times so hold on tight! After this there are 5 sweeper turns that go both directions. You do not need to drift at all for any of these turns. The whole time riders are going through the turns, the course actually hits a couple uphill slants, so keeping in you tuck will be key! There are guardrail lining the road to stop people from falling off of cliffs, so everyone please ride safe. We don't want anyone hitting them.
If you are planing on racing please pre register by emailing your full name to stokedskaters@aol.com by the 21st. Paying to race on the day of the event will be $5 more for any not pre registered riders... so $20 instead of $15.
We hope to see everyone out this season for some fun wheel turning. REMEMBER it is important to make it to all of the events... your points add up per event. There will be some bonus AWSOME prizes at the end of the season for the overall series points winners. Please be on time. Bring your helmets, pads and positive vibes.
Brought to you by
Caliber Truck Co
Rip City Skate
Orangatang
Loaded
Seismic
Longboard Larry
808 Skate
Fireball Wheels
Imaginary Trucks
Sector 9
and more
Posted by Mackenzie Yoshida at 8:58 AM No comments:

LoadedBoards.com/HawaiiWinterOutlawSeries
Posted by Mackenzie Yoshida at 8:49 PM No comments:

ALOHA,
This year will be the second year we are having the Winter Outlaw Series and it’s going to be awesome! Hawaii’s favorite six month / six race series is back with a blast. We have been searching hard to figure out the sickest, safest race courses we can. Some will be your same favorites, and we have some new ones… including a Maui event. Which I’m sure everyone is amped about.
Even though we are only one year deep as a series, for some of these events this will be the fourth year running strong. The series will be very similar to last years, it will include several types of terrain. People who skate everything will shine!
There will be six races, one a month from September through Feburary, with one double event. Riders will be awarded points… along with some bonus gear… and at the end of the season the riders with the most points get goods n’ green thanks to our sponsors!
Since last years series the scene and skill level has grown tremendously! We want to keep this great skate community we have going by rolling with control. There will be a skate session/ BBQ before the start of the series and we ask all skaters who want to participate in the series come out. Here some of the new riders will get to meet everyone, and riders will get to practice safe racing techniques before jumping into the races. All participants will be required to fill out the waiver form that will be available before racing any of the races. Helmets and gloves are REQUIRED to race. Pads and leathers are encouraged.
This year we have a early registration special available. Reserve a spot by emailing StokedSkaters@aol.com or signing up on WheelTurnerHawaii.com and pay your full series entry of $90 by September 17. By doing this you will save $10 on entry fees and get a series schwag bag… you will be stoked! If you choose not to do this, please have your name registered ( no payment needed to register name, pay day of event ) for each race three days before the event or it will be a $5 late fee on top of the entry fee.
September is coming quick, so get ready to do some fun skateboarding. More information on each race will be released closer to the event day, so keep checking back. We hope everyone will come out and try to make it to a few races… if not the complete series. Get those early registrations in once it gets close to the first race. If you have any questions, sponsorship info, imput or anything else email StokedSkaters@aol.com