By Clutchrambo.
By Yoichispeaks
More to come soon!
Posted by Mackenzie Yoshida at 6:36 PM No comments:

Thanks for making Green Skate a huge success. 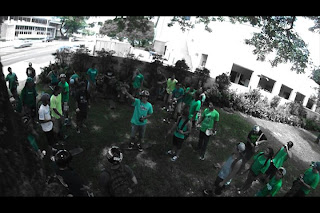 The 2nd Annual Green Skate Hawaii was this past Saturday and it was nothing but smiles for skateboarders. Around 50 stoked skateboarders wearing green showed up at the University of Hawaii at noon ready for the push. People from all over the island with all kinds of boards came to skate together and raise awareness of using the skateboard as a alternative energy vehicle here in Hawaii. With these gas prices it couldn't be a better time! 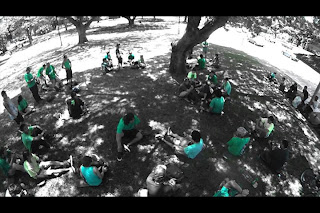 Before leaving UH skaters were given the route, a lucky sticker, and a couple prizes to raise the stoke a little more. Once everyone had their boards in hand and helmets on head we rolled out... one huge wave of green bombing down University Ave. The big group took off tucking down the hill and continued down till Kapiolani. Car's were definitely noticing the group of green by now, but there nothing but positive reactions. 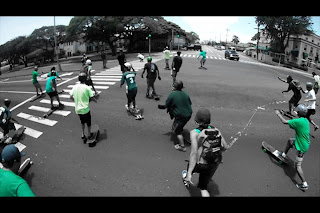 After turning right onto Kapiolani we continued down a ways and turned left onto Mc Cully. We past the tiger human, got into the bike lane then on later onto the path that follows the Ala Wai. Soon we were at Ala Moana beach park where our pack pushed taking up the whole lane, now the pace slowed had down a bit as everyone took in the beautiful ocean view. We strolled through Kewalo basin busting ollies and manuals untill we reached Ward where we turned ito get to Kakaako. On our way to the ocean front finish we even passed a closed off section of road with police and they couldn't help but throw up a shaka. 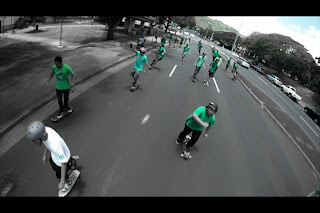 We pushed along the ocean at Kakaako and climbed the center hill which marked the finish of our journey. Now it's bbq time! The grill got warmed up, dogs were thrown on, kickers got set up and the session was on.  After kicking back, getting some food and relaxing a bit everyone got out their lucky stickers. A little over 20 of the stickers were marked with a number or shape which matched one on a prize we had. There was a big box of all kinds of goodies thanks to SECTOR 9 and 808 SKATE. Shoes, skateboard decks, tools, wheels, shirts, hats, socks and more were given to the skateboarders just for showing up. 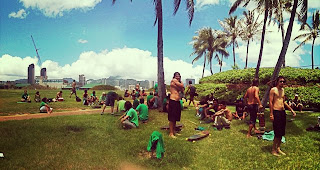 We ate all of the food, skated the kickers in every angle they could have been hit, took a swim, and headed our own ways. At the end of the day it was nothing but stoke and smiles for the skaters. The 2nd Annual Green Skate Hawaii was a big success once again. Thanks to all of the skaters who participated, Sector 9, 808 Skate, and all of the patient drivers on the street who let us have a great sesh. 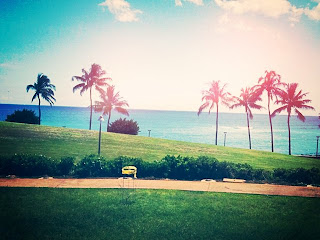 All photos taken by Caleb M. and Mason V.
I will have more photos and videos of the event up soon!
Keep checking back for info on the next wheel turning event here in Hawaii!
Posted by Mackenzie Yoshida at 10:52 PM No comments: 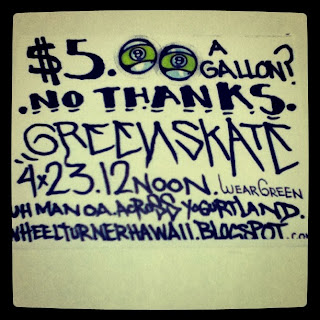 This years GreenSkateHawaii is going to go just like last years. We will be meeting at UH Manoa across from yogurt land and pushing as a group to Kakaako park using the bike lanes/right side of the road exercising safe skateboard commuting skills. Here in Hawaii skateboarding is frowned on, and we need to show that it can be done safely while still having fun. Especially with the rapid rise in gas prices, what better time to use your alternative energy vehicle. We will be having a skate jam/bbq at the Kakaako park water front hills following the push. We got some free schwag from SECTOR 9 and 808 SKATE to give out at the end so be sure you make it all the way!  We are asking that everyone please wear a helmet and a GREEN shirt. 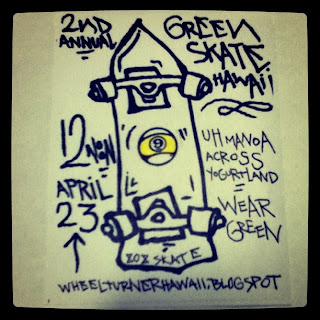 GREEN SKATE HAWAII ROUTE
Meet under the tree at UH Manoa across from Yogurt Land at 12 noon. We will start the push at the intersection of University Ave. and Metcalf St. We will follow University Ave. downhill for a while untill we reach Kapiolani Blvd. The whole way to this point there is a bike lane...PLEASE STAY IN THE BIKE LANE.
Take a right on Kapiolani Blvd. This road is usually very busy, please skate the sidewalk for this short period. We will stay on this street untill we get to the intersection of Kapiolani Blvd and Mc Cully Street. There will be a shopping center on the corner. DO NOT PASS THIS INTERSECTION.
Take a left on Mc Cully St. and take the bike lane once again untill you see the Ala Wai walking path opening next to the bus stop on the right. Aprox. 50 yards. Take a right onto the path and skate along the Ala Wai untill Kalakawa Ave. Cross the street safely and continue onto the walking path next to the convention center. This path will bring us to Ala Moana Blvd.
Take a right onto Ala Moana Blvd. and follow it to the next stop light. This is the light that meets with Atkinson Dr. and Ala Moana Park Dr. Take a left here into Ala Moana beach park. We will cruise along the ocean through the beach park and connect through Kewalo basin boat area. Skate through the harbor and then take a left at the Fisher mens Warf which is on the corner of Ala Moana Blvd. and Ward Ave. Skate on Ward Ave. and take your first left on Ahui St. Follow Ahui St. all the way till the end till you get to Kakaako Park.
When getting to Kakaako, skate along the the ocean untill you get to the restrooms, turn right and we will be finishing on the center hill that has the spiral paved path to the top. 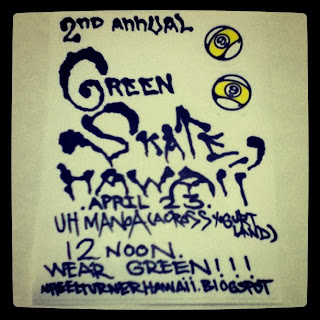 GOOGLE MAPS APROX. ROUTE
^^^^^^^ Closest i could get Google Maps to the route ^^^^^^^
REMINDER. SKATE AT YOUR OWN RISK. PLEASE USE A HELMET. STAY IN BIKE LANES, ON THE RIGHT SIDE OF THE ROAD, AND ON SIDEWALKS. OUR GOAL IS NOT TO BE REBELLIOUS, IT IS TO RAISE AWARENESS OF THE SKATEBOARD BEING USED IN HAWAII AS TRANSPORTATION. WE ARE ON A ISLAND AFTER ALL! 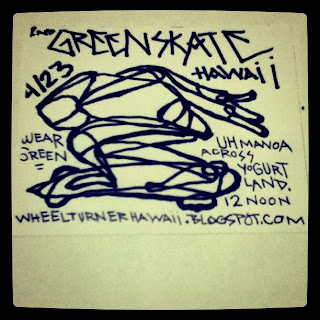 SPREAD WORD. SEE EVERYONE AT NOON ON SATURDAY
Posted by Mackenzie Yoshida at 10:12 PM No comments: 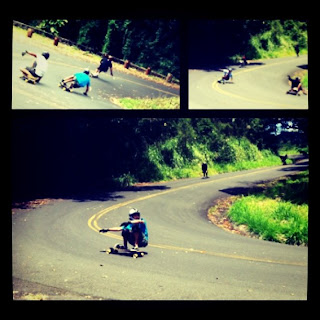 Today is April 20th... 420! Here on Oahu the annual 420 Tantalus bomb went down. This event has been going on for 10+ years now on and has owned up quite the name in Hawaii. Every year, Tantalus, 420. @ 420. Since before i took longboarding serious id hear about the 420 bombers and see them on the local extreme sports tv show. Because of this the Honolulu police department keeps close watch on the hill, and have shut down the bomb several times.
This year the skate couldn't have went better. 20+ skaters were on the sunny, dry hill, ready to skate. We all got to surf the hill together in close packs. Got to do two runs, both were EPIC. The best thing of all, after the two runs... there were still no police in sight. Did they give us this one???.. and to go along with that there were no bad injuries.
After a good skate like that we had to finish off our 420 with a nice swim at a local waterfall and some good grub. Today is like a holiday for me. I look forwards to bombing with that big pack of Hawaii skateboarders all year long. The great green our aina provides is just the icing on the cake!

Big Mahalo to Darryl for getting this great day of wheel turning together! 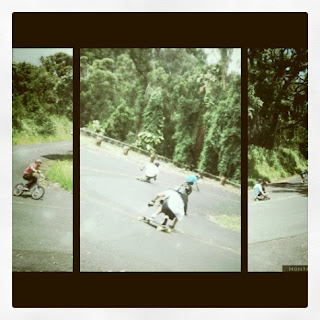 More photos and video to come soon!
Posted by Mackenzie Yoshida at 9:00 PM No comments:

2011 Green Skate Hawaii
APRIL 23, 2011
12pm NOON
@
UH MANOA ( grass across from yogurtland ) - Kakaako Park
This years GreenSkateHawaii is going to go just like last years. We will be meeting at UH Manoa and pushing as a group to Kakaako park using the bike lanes/right side of the road exercising safe skateboard commuting skills. Here in Hawaii skateboarding is frowned on, and we need to show that it can be done safely while still having fun. We will be having a bbq at Kakaako park water front following the push. We are asking that everyone please wear a helmet and a GREEN shirt.
KEEP CHECKING BACK FOR INFO
Posted by Mackenzie Yoshida at 10:15 AM No comments: