Mahalo For A Decade Of Support! 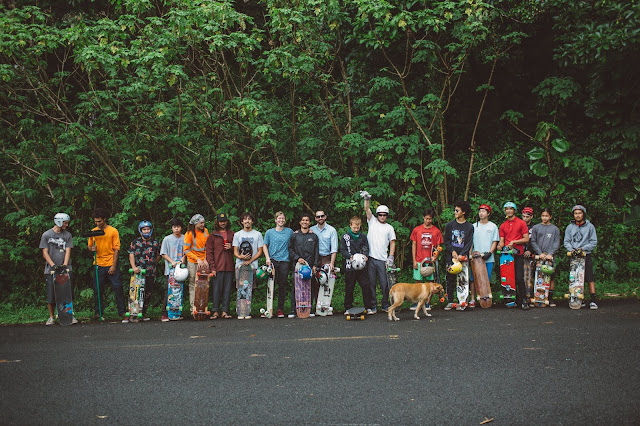 This year marks the 10th year that WheelTurnerHawaii.com has been around and I just wanted to send a big MAHALO to everyone for supporting the website for the last decade. It has been a pleasure bringing you all the goods on the Hawaii Downhill Skateboarding scene. I feel the the site not only helped the community here in Hawaii grow, but it's even encouraged people in scenes across the world to help grow their local communities as well.

I like to give my all into everything I do, and recently this site hasn't been updated nearly as much as I'd like it to be. Plus since making this website, Instagram has taken over... so why not change with the times.
You can still keep up with the Hawaii Downhill Skateboarding scene and events by following my new IG account @DHSBHI. Its pretty much the website, but on a different platform so you won't be missing out on much!

Thanks for the good times and great vibes.
Keep those wheels turning! 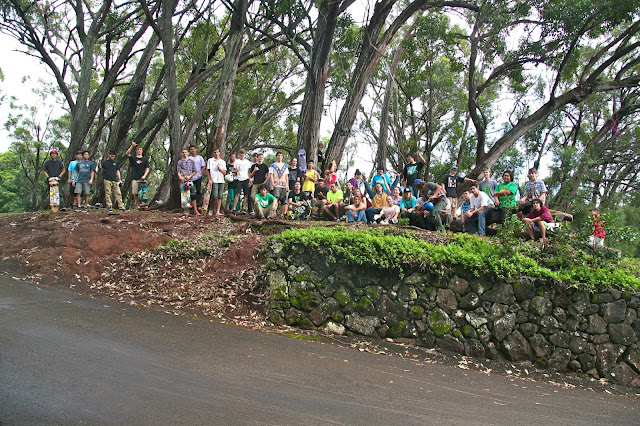 Posted by Mackenzie Yoshida at 11:27 AM No comments:

Aloha everyone!
Checking in from the Big Island where we opened up the series with a quick downhill race at the homestead.
The conditions were perfect at the hill; choke sun, small kine clouds, and a nice breeze to keep it cool. It was a mellow day, with only a few cars coming through the whole time. The initial course was patchy at best, and really quite scary, the riders decided to move further down the hill. They selected the course, spotters were set up and the practice runs got under way. The riders took a few runs on the now closed course testing the speeds and working up some course knowledge. Cameras were now in place, spotters had their signals dialed and the boys were ready to race.
The course was epic! They took it full speed wobbling through the bacon right, on the edge of grip banking left and then catching even more speed before drifting through the final left corner to the finish. It was anybody’s game, but after a few rounds of intense, fun racing, Zach emerged with the victory.
It was a rad time for everyone, for the race and all the skating that commenced after. We’re stoked and thankful that the event was a success! We are looking forward to the next event of the series in Maui! We’ll see you all next weekend! 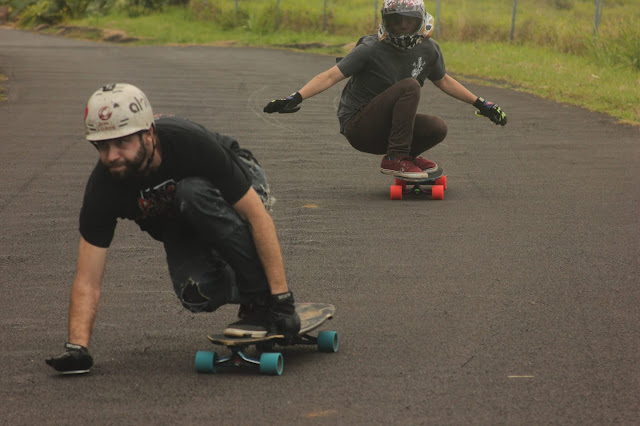 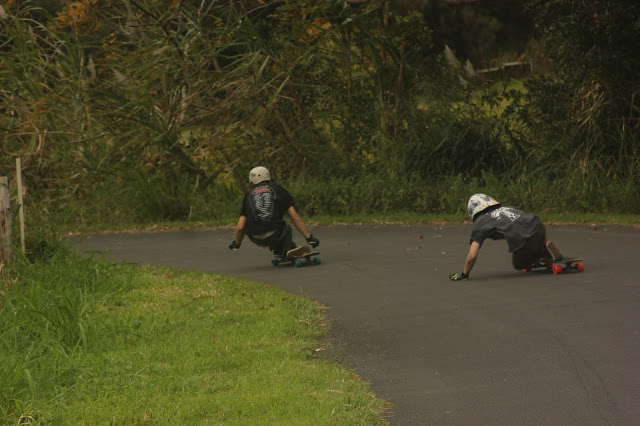 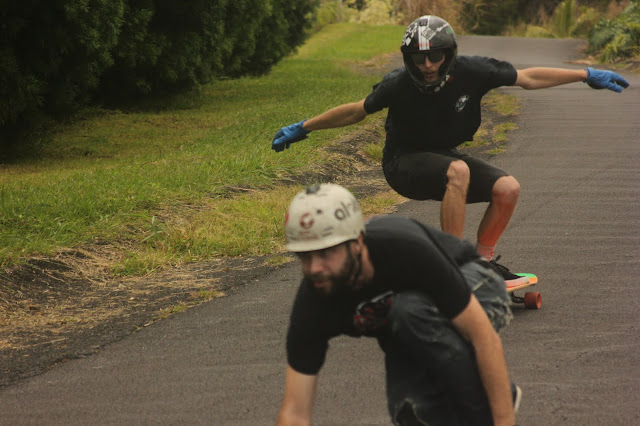 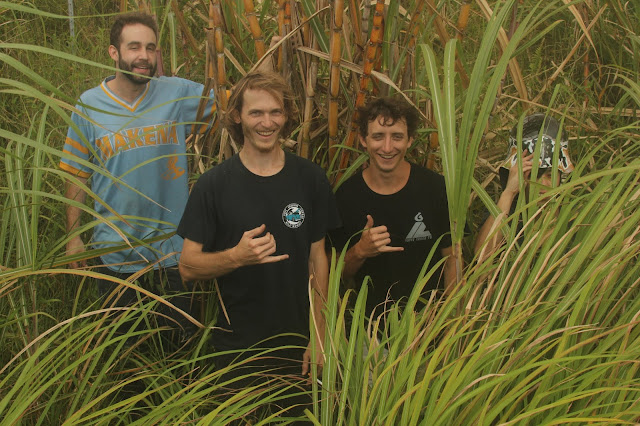 Posted by Mackenzie Yoshida at 3:06 PM No comments:

Wheel turners, enthusiasts, competitors, photographers, fans and the like!
ALOHA AND WELCOME!!

It’s time once again to get stoked on the winter months! The wheels are starting to turn on the Hawai’i Winter Outlaw Series 2018-2019!! Three events, Three Islands, wrapped up with one Grand Finale at the FOSAL 11! Points are accumulated in each of the events, who shall be crowned the champ in the HWOS 2018-2019 series?! Last year we had a super close competition with 1st and 2nd place ending the series only 3 POINTS APART!!
[Results of the 2017-2018 HWOS]
This year is gearing up to be an exciting winter of racing. The boys on the Big Island will be throwing the series opener race with a 1v1 showdown through a fast sweepy course with a big left drift right before the finish. This is a brand new course that we have not raced here on the Big Island so get stoked, it’s going to be a fun one!
Course begins at start, ends at 31 seconds.
“Safety Meeting – by Lurkers Lounge Media”
https://www.youtube.com/watch?v=1NQpI92au2o

The second event of the series will be The Maui Challenge. We will be competing 1v1 on a single lane dream course with speed, grip and plenty of slip. All you could ever ask for in a downhill race course. In past years Maui has proved to be the battle ground with many people showing up from out of state and even out of country. Competition is sure to be fierce! You don’t want to miss the sessions happening during this event!

The third and final race of the series will take place in O’ahu with a 1v1 battle down a speedy mountain littered with obstacles. This race will take skill in a variety of skateboarding disciplines. Be sure to hone your skills for this battle on the boardercross! It’ll no easy bomb to the bottom!

As the racers compete in the three race events they will earn points based on their placement in the race. Each race is worth a whopping 185 points for 1st, with 2nd earning 170, and each place thereafter earing 5 points less (eg. 3rd = 165, 4th = 160, 5th =155 and so on). Its crucial to make it to each and every event in order to be considered for a podium position at the HWOS!

Don’t miss out on this exciting Winter of downhill skateboarding! January is coming up quick, so get your tickets, get your training wheels on and go for a rip! We’ll see YOU for the HWOS Big Island opener!! Cheehhooo and keep them wheels turning!

Posted by Mackenzie Yoshida at 12:27 PM No comments:

Posted by Mackenzie Yoshida at 12:26 PM No comments: